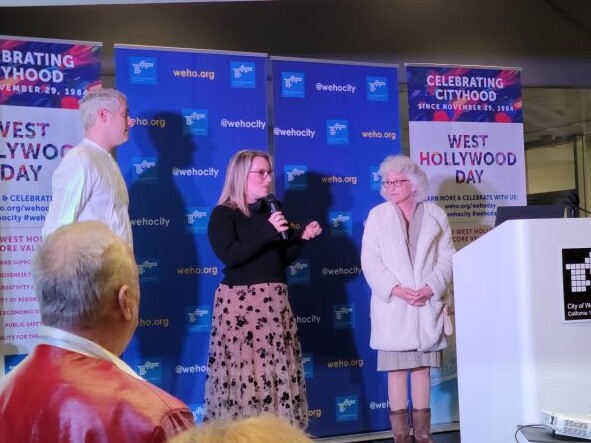 “Tonight, let’s celebrate West Hollywood for all the unique things it is,” said City Manager David Wilson, as he addressed about 175 residents, commissioners, fellow councilmembers, and city staff on Tuesday evening as the City of West Hollywood commemorated 38 years since its incorporation on November 29, 1984.

Mayor Lauren Meister explained to the audience that West Hollywood came together as “An unlikely coalition of the LGBTQ community, seniors, and renters. And it just goes to show you – when people want to get to a goal, working together, they get there. So, yay us!” Meister then congratulated fellow Councilmember Lindsey Horvath on her “stellar election” to the Board of Supervisors and congratulated Councilmember-elect Chelsea Byers in her absence. Byers finished second in voting behind Meister in the November 8 General Election, and was endorsed by Westside Voice, as was Horvath for Supervisor.

“I feel very blessed to have been a part of the West Hollywood family at a time of change,” said Horvath. She added, “And I feel very blessed to have served with people who helped make this city what it is today, and I helped welcome new leadership into the community.” She also spoke of the importance of stories about West Hollywood that residents share with one another, and advocated for residents to express what they love about the city. She also acknowledged that it can be difficult at times to work in harmony, saying, “When we have those really passionate feelings, those really tough conversations sometimes, it’s just because we love this city so much.” Horvath announced that she must resign on Sunday, December 4 in order to be sworn in as the new Third District County Supervisor on Monday morning.

Councilmember John Erickson quipped, “The city’s a Millennial,” after he spent a moment thanking former Councilmember Abbe Land for teaching him how to love West Hollywood. Erickson also asked all sitting and former city commissioners, appointed by the council, to raise their hands and be recognized.

The festivities took place at West Hollywood’s Aquatic and Recreation Center, adjacent to the West Hollywood Library. The crowd was treated with delicious appetizers and “mocktails.”

Photo by the Author